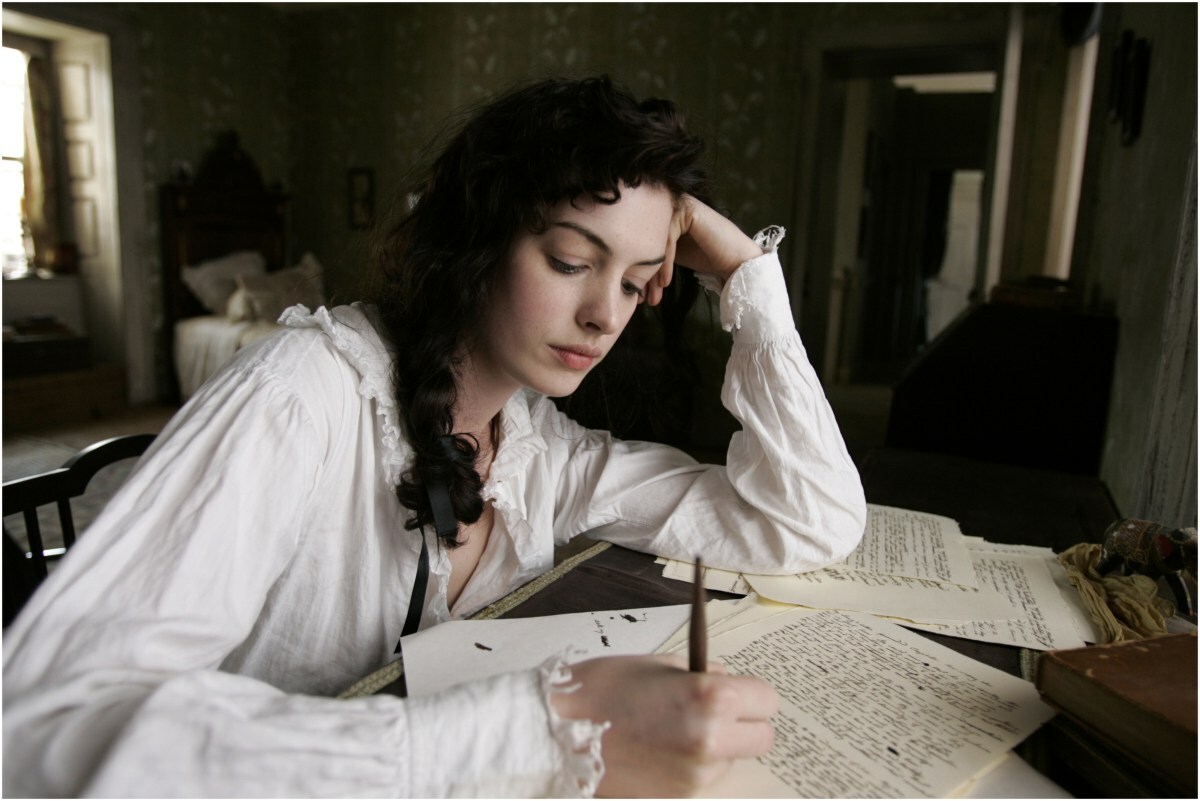 As a Jane Austen fan, I went into this film ready for another epic romance. I mean, sure, I know that Jane Austen’s real life was not like the beautiful romance novels she wrote, but I still hoped. And I was so wrong in hoping. This film caused me more pain than anything else.

Becoming Jane, starring Anne Hathaway and James McAvoy, follows the life of the legendary author Jane Austen. It is not an entirely accurate depiction of her real life (what is known of it). In the film, Jane struggles to prove her independence in a world where her only aspiration as a woman is to get married in order to stop being a burden to her parents. Jane wants to make a living off of her writing, though no one believes she’s capable of it. Then comes a beautiful boy, Tom Lefroy, to shake up Jane’s world. As it goes.

The story then follows Jane and Tom, in their seductive dance. Literally and figuratively.

Let me tell you. Anne Hathaway and James McAvoy had such strong chemistry, that I expected them to rip off each other’s clothes at any point. I’m not sure why I thought that was plausible, considering the many tight layers of clothes they’re constantly wearing in every shot. Anyway, Jane and Tom? Yeah, I was all over that ship. And of course that’s why they tortured me so much.

I believe the real Tom Lefroy did court the real Jane Austen, but then their financial differences made a marriage union impossible. This is a topic of which Jane has explored greatly in her novels. I was glad to see the variations of that expressed in this film.

Jane Austen is not the type of gal to marry for money, despite her family’s necessity. Although it’s obvious that Jane sympathized with those women who had no other choice. Fortunately, Jane was able to sell six of her novels, and after her death, gained the recognition she deserved for her talent.

And on a final note, I’d just like to show the beauties that were Jane and Tom throughout this beautiful, painful story.

I adored this film, but I would think twice before watching it again. I recommend it to anyone into Jane Austen’s novels, literature in general, or masochists.

Fanfiction has been around since forever it seems. It’s a great way to fix mistakes in the original work, to add in more representation, to explore different routes the characters could have taken, or to simply give the characters happiness that the original always seems to keep out of reach. I also find it is a good way to practice writing while getting nice feedback.

Recently, with the rise of self-publishing, turning fanfic into books for profit is very easy. Change some names, slap a cover on it, and there is a new book out in the world. Some have even become best sellers, and turned into movies. And I have to say, for the most part, I don’t really like this.

I’m not saying this to bring down people, or because I think that fanfiction should stay fanfiction or anything. I don’t begrudge anyone any success or money they might get from doing this. My main problem is that fanfiction works because the reader has that background information, and the new book usually doesn’t make up for it.

Fanfiction doesn’t need to explain why a character is the way that they are. Everyone who reads it already knows the back story. They know the world that it is set in. None of it is needed to be expanded on. Usually when it gets turned into a book the author does not expand on that, and the book is stale. It just doesn’t work. The little inside jokes don’t translate, and any sex scenes are typically useless to any plot.

Turning fanfiction into a book can work, but it isn’t just switching names out. It would have to take more work than that. Work that people typically don’t put into it.

The other night I decided to watch this HBO show called Looking. It was recommended by Youtuber Tyler Oakley during one of his Psychobabble podcast episodes. The premise sounded great–three gay men living in San Francisco.

Before I get into my point, I should say that I am a woman, who although she does not prefer labels, could be considered pansexual. Honestly, sexuality is such a complicated subject because of all of the labels. I understand that to some people, these labels are helpful in defining who they are, but not to me. If I fall in love with someone, I’m going to fall in love with who they are on the inside, not necessarily what kind of genitalia they have. I do have a preference for boys, so to save me the struggle of explanations I identify as straight. But really, is anyone really, truly, straight?

So, anyway, I was watching this show, and I was pretty shocked. Not with the show itself, because it was a great first episode. The writing was wonderful, and so were the characters. But I was taken aback when I started feeling a bit uncomfortable. And I realized the reason why.

This great show showcased plenty of homosexual men and, like, one (straight?) woman. It wasn’t only the fact that I wanted to feel represented somehow in this show, like I want to be represented in most shows. It was that I felt like I was snooping into something that was not at all my business. Was I even the intended audience for this? Because I didn’t feel like I was.

And then the answer hit me like a punch in the gut.

I’m so used to seeing shows and films centered around straight people. If any, there are one or two homosexual characters. That’s it. And I usually focus on those few homosexual characters and I root for them to be written well and respectfully. But really, the straight people have the final say in these shows and films. It is their story, only theirs. On the other hand, the lack of women usually is overshadowed by handsome leads, which I’m ashamed to admit. I hardly notice when women are lacking in the media because of the attractive straight men.

So what happened to me while watching Looking? I realized how much we are lacking in representation, not only for women, but for all different sexual orientations.

In a show in which I struggled to find a single straight character, I learned that the LGBTQ community doesn’t have much representation in popular media, so who do they relate to? Do they feel like outsiders when watching shows and films featuring straight people? Do they feel like they’re not the intended audience, therefore should not be watching it? And when they do find that uncommon LGBTQ character, do they feel forced to like/relate to them because it is the only representation shown?

I am aware that this world still is fighting for acceptance of all of these LGBTQ labels. People are wary of those who are different from them. But why are we broken apart? Why does it have to be all of the straight characters in one show and all of the gay characters in another one? How long will it take before we have a gay superhero who kicks butt and saves the city at night but during the day he gets really nervous asking out the guy from the coffee shop? Or a woman in an action film, where she isn’t sexualized in one of those tight leather outfits?

Representation is so important. Fictional character sometimes breathe life back into people. It’s necessary to try to be as equally diverse as possible. Maybe this won’t happen tomorrow, or in ten years. But gradual changes would make a huge difference.

As a writer, I hope I get to be a part of this change in the future.