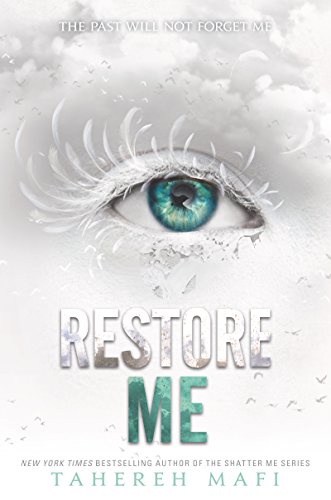 “Why did I think I’d be capable of running an entire continent? How did I allow myself to imagine that a supernatural ability to kill things with my skin would suddenly grant me a comprehensive understanding of political science?”

My love for Warner is still strong. That much has stayed consistent throughout the series. But, of course, Restore Me is about many, many other things besides Warner — unfortunately.

I devoured the first three Shatter Me books when they were only a trilogy. I read them all over a weekend, and then re-read them recently with Nicole. She reviewed all three of them before, but now it’s my turn.

Restore Me picks up about sixteen days after the end of Ignite Me, which continues to be my favorite book in the series. We follow Juliette and Warner in the aftermath of taking over The Reestablishment. There were a lot of loose ends to begin with, and some of them were covered, but many were not. I’ll break this down.

The characters: Anyone who’s read this series is well aware that it’s very character driven. The characters make the series worth reading. We still have Juliette, though her character development is doubtful. I still don’t know what to make of her, especially after the ending. I definitely do not trust her to run a nation. My personal favorite, Warner, is still a sweet boy (who’d hate me for calling him that). He claims he never changed, but there’s an obvious change to him, both outside and inside. Aside from the haircut, Warner is learning to be less selfless, and trusting of other people outside of Juliette. We have Kenji, possibly the greatest character ever written. Kenji is everything that’s good with the world, and more. He’s comic relief at its finest, and we finally learn more about his past.

I loved some of the new characters, but I feel like there wasn’t a lot of them outside of Nazeera, who was fantastic. I was grateful for such a wonderful female character, who Juliette actually got along with. I liked seeing more of Adam and James, but other than them, the other characters faded to the background. I found myself missing them, and overall just wanting more.

The plot: I was very intrigued by the sudden world-building drawn out. There was a lot of explanation about the world, and the leaders of the different continents. However, there wasn’t much expansion of some pressing issues because the romantic drama kept getting in the way. Then I realized what series I was reading, and I wasn’t angry about it. Basically, there were a lot of plot holes, but Warner’s hot, so all is forgiven.

The romance: The love I have for Warner runs deep. Juliette is okay. I fear that the roles have switched between him and Juliette. I thought it was natural the way he closed off from her. There was a big reason for that. I didn’t think Juliette fought enough to get inside Warner’s head, though. My problem with Juliette is her selfishness. She doesn’t realize how awful she tends to be, and Warner sees her as a perfect woman. There are so many issues with their relationship, but I gotta say, I’m still rooting for Warner’s happiness.

Representation: The anxiety rep was amazing. Suffering from anxiety myself, I can’t explain how incredible it felt to see myself in this book. My anxiety tends to make me feel like a burden sometimes, but seeing it represented so well here made me hopeful. I want the stigmas to be removed, and I think it’s important to incorporate this into stories. There was a trans character, but she was outed without consent by a transphobic character, so heads up for that. Aside from that, there were characters from different countries who spoke different languages, but again, they were far from the focus of the story. I feel like I hardly learned anything about them.

There are trigger warnings for panic attacks, depression, mention of suicidal thoughts, and transphobia.

I still haven’t gathered my thoughts completely. That ending left me breathless. I don’t know what to make of it, but I know that I cannot wait for book five. Or maybe a novella in between? We’ll see.

This weekend we’ll have a spoiler review of Restore Me on our podcast, so look out for that.

Hello, everyone! We just wanted to let you guys know that we have our very own podcast called Tea Talks. We discuss things from books, to myths and legends, to movies, and everything in between. It’s now available on the platforms below, so check it out. If you listen and like it, please leave us a review. It would help us out a lot.

We already have three episodes in which we talk about Tahereh Mafi’s Restore Me, The Mothman, and the Black-Eyed Kids.

Thank you so much!

Restore Me by Tahereh Mafi is the fourth book to the Shatter Me series. Four years after the original trilogy ended, Mafi has decided to continue on the series for another three books. The first one, Restore Me, is coming out on March 6th, 2018. Just a couple days ago a sample of the first thirty pages came out which both Isis and I were lucky enough to get and read. We’ve since come up with a few theories about the new series.

Also, we’ve just recorded the first episode of our new podcast Tea Talks. Currently, it’s just on Youtube, but we’re hoping to move it to other platforms in the future. Our first episode discusses Restore Me more in-depth, if you want to know more of our thoughts.

All I ever wanted was to reach out and touch another human being not just with my hands but with my heart.

The Shatter Me series follows Juliette, a girl whose touch can be lethal. She’s been locked up for almost a year because she murdered someone when the book first starts. While she was locked away, the world went to shit. It’s a proper dystopian society. Throughout this book, and again, the whole series, she has to learn about and choose what to do with this power.

The first thing everyone talks about with these books is the writing style. It’s whimsical, full of metaphors that don’t really make sense, and . I don’t like the strikethroughs, but thankfully as the series continue, they decrease until they are completely gone. I didn’t understand a lot of Juliette’s rambles, but I do understand they are there to show how scattered her mental state is. It made it quicker to read though which I really liked.

One of the main overarching dramas of this series is the love triangle between Juliette, Warner, and Adam. It is incredibly frustrating to read, but it isn’t the typical love triangle. I really think Mafi’s main thought when starting these books was to have something different, and she succeeded in that.  For those more into the romance, they will like this part of the books more. For readers like me, it was simply frustrating.

For this first book it took me maybe two years to finish. I think I had given up on it, but then later, I wanted to cross off some books from my currently reading list. So I finished it. I gave this book two stars. 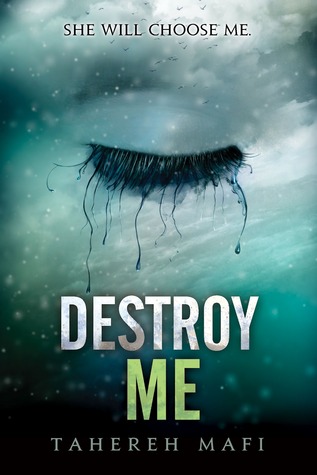 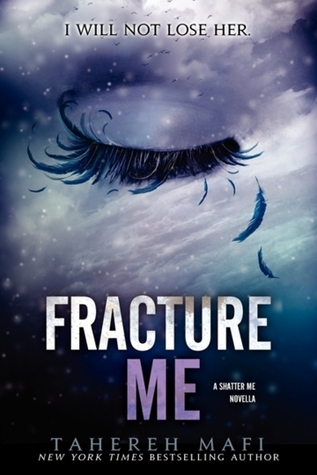 Time goes on even when we do not.

So you are probably wondering why I continued this series, right? Well, with the news of the of Restore Me I read the excerpt that was released, and I liked it. I was feeling down at the time, and it made me smile, so I texted Isis, who loves the series, and we decided to read the rest of the series together. So we started off again with Destroy Me, the first novella in the series.

Destroy Me is set between Shatter Me and Unravel Me. It’s set in Warner’s perspective. I can’t say much. I don’t want to spoil anything, but I enjoyed it a lot better than I did the first books. I gave it three stars at least.

Fracture Me is the second novella. It’s set between Unravel Me and Ignite Me. It’s from Adam’s perspective. I gave it four stars.

I usually find novellas to be useless,  but these add so much to the series. Very important plot and character development happens. If you don’t read these, you’ll be missing out.

I am no longer afraid of fear, and I will not let it rule me. Fear will learn to fear me.

The novellas do something interesting to the rest of the series. While it makes it more interesting, it also makes part of the books frustrating. Stuff is reveled in it that the readers will know, but Juliette will not. And it takes a while for everything to come out so that gets frustrating.

Juliette’s character development is great. From the beginning of the first book to the ending of the last book, she grows so much. I didn’t love her, and I still don’t honestly, as much as others do. Which made me feel really guilty for a lot of the series since people always said she was like the ultimate feminist icon. She’s very dramatic, and so very self centered. It lasts pretty much the whole series. It gets called out by other characters, and she always has this revelation about how they are so right and how could she be acting this way. But then she continues to act how she was before. Pretty much every time she opened her mouth I was texting Isis about how annoyed I was with her. It never really ended throughout the books.

The world building in the series is bad. Nothing is explained deeply at all. I had so many questions and the books didn’t even attempt to answer them. It can be explained away with Juliette being so self centered, but that’s what I wanted and never got. Juliette’s powers still has plot holes in them. The world is never explained.

The side characters were what really got me with this series. My favorite character out of all of them Kenji. He’s the best. It’s sad that Juliette is never interested in branching out more, because in the third book where there’s a small little group all the time, that’s where I loved these books. All of my annoyance would fade, and I really enjoyed myself in those scenes.

I gave Unravel Me three stars and Ignite Me four stars. That gives the entire series an average of 3.2 stars for me. I am going to read Restore Me when it comes out, and I have high hopes for it. I think she’ll fix what was missing from the original series. I did see Mafi mentioning adding more characters which will have more diversity. There might also be a Kenji novella. Both will be much appreciated. Most importantly, I hope for well fleshed out world building.

In the end, I find it hard to end this review. Can I really recommend it to others? I did finish the series, and plan on continuing it, but it’s not at all similar to other books I would recommend. Those didn’t cause me to go on long rants, or frustrate me to no end. Those I appreciated while reading them, not as the fifth book was ending. But I spent weeks reading them so they deserved a review even if it’s taken me three days to finish it. Even as I’m typing I still find my feelings of these books to be very complicated, but I hope I explained things as clearly as I could without going into any spoilers.