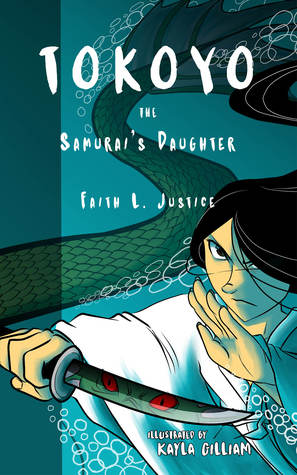 “And it’s adventurous. Most girls – even a samurai’s daughter – don’t get to cheat death, fight sharks, or find pearls of great worth.”

I was sent a copy of this book in exchange for an honest review.

Tokoyo, A Samurai’s Daughter by Faith L. Justice is a middle grade story inspired by a Japanese folklore called The Tale of the Oki Islands. It’s a short book of only 101 pages that follows Tokoyo who is the daughter of a samurai and an Ama in her spare time. That means she dives in the sea for seaweed and clams. One day her father is accused of poisoning the Regent, and is sent to exile. Tokoyo knows he didn’t do it, and is intent on proving that innocence.

Because of the shortness of the book, a lot of detail wasn’t incorporated. Sometimes I did want more of that when Tokoyo was traveling though the big action scene I think was described well enough.

Each chapter begins with an illustration by Kayla Gilliam. I really liked that. Her art is simple yet pretty just like the story.

Overall, it’s a quick story with pretty simple writing. I finished it in an hour. It is also nice that it is based on folklore I haven’t seen, and involves the girl going on an adventure instead of waiting for a prince.